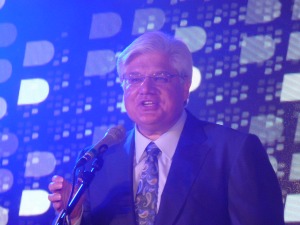 Wall Street Journal just posted a story saying that Mike Lazaridis and Doug Fregin, co-founders of Research In Motion, may jointly bid for BlackBerry along with support from Cerberus Capital Management. The WSJ cites the usual anonymous “people familiar with the matter”.
Qualcomm Inc., a maker of cellphone chips, is also in talks to join the potential Cerberus group, according to people familiar with the matter.

The jockeying among possible bidders comes on the eve of a Monday deadline for BlackBerry buyout offers. The Canadian company and its advisers set the deadline to coincide with one for Fairfax Financial Holdings Ltd. to solidify its preliminary offer for the company.

Fairfax, which owns a 10% BlackBerry stake and is led by former company director Prem Watsa, reached a tentative agreement in September to buy the company for $9 a share, or $4.7 billion.

The talks between Cerberus and Messrs. Lazaridis and Fregin underscores the seriousness of their consideration of a takeover of the company—even as such a tie-up would potentially eliminate a competitor from the sales process.