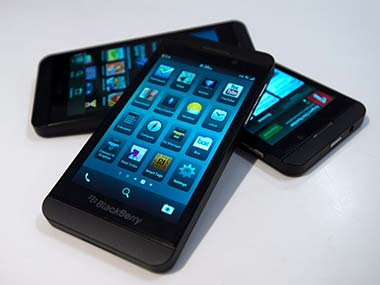 An interesting article by Ivor Soans from First Post –

Edward Snowden may be Obama administration’s biggest bugbear, but the fallout of the NSA revelations may make Snowden a hero to BlackBerry fans desperately hoping for a revival of the once all-powerful smartphone maker.

The reason: Even as the US administration is working overtime repairing the damage to US foreign policy interests after it was alleged that NSA surveillance extended to the leaders of Russia, Mexico, Brazil, France and Germany , the furious German government which considered the US a close ally is now taking steps to protect itself despite US claims that it isn’t monitoring German Chancellor Angela Merkel’s communications now.

And as most Chief Information Officers will attest, on the mobility front, BlackBerry is the Gold Standard when it comes to security. According to a blog post by George Kesarios, as a result of the NSA revelations, the Apple iPhone will no longer be a device that will handle ‘official correspondence’ in the German government.

The BSI (Bonn federal office for information security) has drawn up guidelines and phones used by the German government must be BSI approved. And since the software developed by the BSI is not compatible with the iPhone, the conclusion of many observers is that soon iPhones will start disappearing from the German Parliament, says Kesarios.

Incidentally, the German government purchased nearly 40,000 secure BlackBerry Z10 smartphones a few months ago, including one for Merkel. eWeek reported that the Z10s in use by the German government included a Secusmart encryption engine installed via a micro SD card, that takes advantage of BlackBerry’s Balance feature, which allows the creation of a wall between two functions of the BlackBerry — once installed, the Secusmart BlackBerry meets NATO requirements for classified communications, allowing the BlackBerry Z10 to act as a typical smartphone, while encrypting all communications with other secure systems.

Other German government bodies have also taken to the Z10 since no foreign intelligence agency has succeeded in breaking the encryption on the phones, according to the German Interior Ministry . And this when Secusmart says that there was no way the NSA could crack the encryption built into Merkel’s Secusmart-enabled BlackBerry Z10.

Secusmart CEO Hans-Christoph Quelle insisted that the high security solution from Secusmart for secure communication within the German government was not affected by NSA attempts. “Theoretically, it would take 149 billion years to crack this code based on today’s technical standards, even with the use of special computers. The universe itself isn’t even that old. That’ll definitely keep the USA busy for awhile,” Quelle was quoted as saying.

In the UK, the Telegraph reports that Apple iPads have been banned from Cabinet meetings due to fears of foreign intelligence agencies bugging confidential meetings. It is feared China, Russia, Iran and Pakistan have developed the ability to turn mobiles into microphones and turn them into transmitters even when they are turned off, using a Trojan computer virus, explains the Telegraph article.

And in the US itself, while President Obama was the first President to carry a personal mobile phone and uses a secure BlackBerry , members of his Administration are told not to take Apple iPads on overseas trips because they are not considered secure enough.

While angry countries are making their annoyance known — in September Brazilian President Dilma Rousseff cancelled a State Dinner at the White House , Brazil also joined hands with Germany to sponsor a resolution at the UN General Assembly’s human rights committee to protect the right to privacy against unlawful surveillance.

But while the posturing takes place it would be fairly obvious that Brazil, France, Russia, Mexico and hopefully our very own India would take US promises of no more surveillance with a NSA-sized pinch of salt. And which also means they’d be looking for secure mobile solutions and BlackBerry fits that need like a perfect glove.

And closer home, with claims of even state governments snooping illegally, and allegations of illegal tapping by even units of the Indian Army BlackBerry’s smartphones could find a renewed lease of life from those worried about such illegal monitoring, which thanks to scary revelations might include every official and politician in India. But even in other countries, this would certainly mean the niche government market for such solutions.

And new BlackBerry boss, John Chen, Executive Chair & CEO is a focused enterprise man who knows more than a thing or two about niche markets. In his last executive position, Chen was CEO of Sybase, and he took it from a position where it had lost respect and was bleeding money to one where he sold Sybase to SAP for $5.8 billion. His modus operandi was slashing expenses and a focused pursuit of niche segments of the database market rather than competing with database behemoths like Oracle and IBM.

While BlackBerry spends on boosting BBM’s popularity, it has also launched the first salvo into monetising BBM.

The focus on the enterprise might be the other lynchpin of this strategy till they hopefully get to the future where BlackBerry could aim at becoming a leader in software-driven mobile computing solutions (that touches vehicles, healthcare, financial markets, etc,) with BBM extending reach to the consumer domain and connecting the two (which was also why BBM went cross-platform).

In the context of the CMO and COO exits, Rob Enderle, president and principal analyst at the Enderle Group told Financial Post that much of the marketing activity had been reaching out and going after consumers, and in an enterprise business, that’s mostly carried by sales. In the same article, BGC Partners analyst Colin Gillis explained: “If you’re going to have a consumer focused business. It’s good to have a CMO. Because you’re going to be doing a lot of heavy advertising.” Gillis believes BlackBerry will inevitably “deemphasize the handset business, or won’t focus on selling it to consumers.”

Chen certainly seems to be starting well on the incisive leadership block and the NSA revelations may have just given BlackBerry a lucrative chance to own a profitable niche from where Chen can start rebuilding the brand. And while its early days yet, some have even started comparing him to Steve Jobs .